Sunday dawned wall to wall sunshine and stayed that way.  We couldn’t stay all day but were we given a show the time we were there!!

Intruders -Yes.  One Male stayed around and from the noises our female was making we would say this was not her male!!  However he perched on the lighting conductor on top of the main spire to survey the territory and chased off anything that came near.  Mum was clearly impressed as she presented herself for mating.  Obviously feeling very pleased with himself he settled on the lightning conductor again  and then repeated the mating!  So it looks like we might have a different male – he’s not ringed so can’t say for sure but his behaviour is very different. 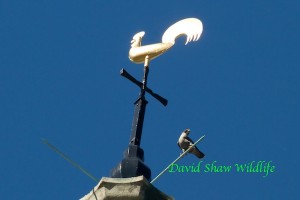 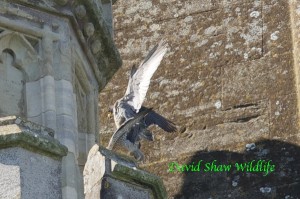 Our female was clearly pleased with him as they mated for the second time!