I arrived yesterday to a lot of squawking from a juvenile sitting on the west balcony, then dad emerged and the juvenile dropped down.  I assumed there was food in there.  He perched where he could keep an eye on the juvenile in the balcony, and we could keep an eye on him.  After a while, the juvenile, our boy no. 35, emerged with an extremely full crop and sat in one of the castellations to have a nap.  Suddenly, one of his sisters popped up and sat next to him.  We all thought that was lovely, siblings sitting together for a rest after dinner.  No.  It wasn’t his friend, no. 37, it was in fact no. 36.  She started pecking at him, at his face, his beak and his feet.  Perhaps she was trying to clean him up after dinner, but it looked a bit brutal, almost as if she was trying to eat him (I don’t think she was…).  He didn’t look impressed.  He put up with it for a while then turned his back on her.

Meanwhile, dad had dropped into the balcony for a share of the dinner he’d presumably brought in earlier.  Our boy, having been woken up by his bullying sister, was obviously somewhat grumpy (can’t blame him!) and started squawking loudly at dad (he couldn’t be hungry, his crop was so full!).  He dropped down and the squawking continued for a moment, then dad rushed out and perched on the lower tracing on the spire – not an easy place to perch, and probably beyond the landing abilities of the juveniles.  He sat there in safety for a long time afterwards. 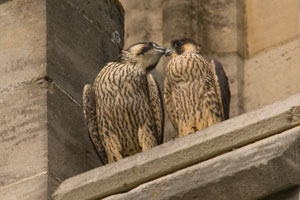