All out and about

At last, yesterday afternoon our last female juvenile fledged!  Now all four are flying around the cathedral, perching in obscure places, watching the pigeons intently (even occasionally flying after them, although they wouldn’t know what to do if they caught up with them at this stage!), and generally giving their parents a tough job trying to keep track of them all!

This evening we were standing in the cold drizzle, and for a good hour or so, we just saw two or three perched while the others were out of sight, inside turrets or the balcony.  We were rewarded for our patience by an amazing view of all six peregrines together.  Some were perched, and some flying, all visible at the same time.  It was extraordinary, and very special!

Dad flew west at one point, closely followed by the male juvenile.  When dad got about 20 yards beyond the cathedral, our boy obviously decided it was too scary and more of a challenge than he was ready for – he halted fairly abruptly and returned to the safety of his home.  Dad realised he’d lost his companion and returned too, keeping a close eye on his charge.

One of the females dislodged dad from his perch, presumably wanting him to get some dinner.  Shortly afterwards, mum did the same, knocking him off his new perch.  He didn’t take the hint, he just found a third place to sit, trying in vain to get some peace.  Mum gave up on him and went out hunting herself, returning after a few minutes with a pigeon, to the obvious vocal delight of the whole family. 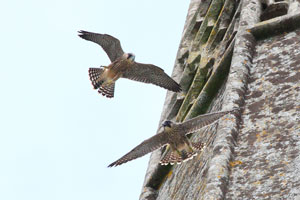