Again today both 35 (the male) and his sister 37 were out.  They flew confidently and found unusual perches below the level of the balcony.  Our boy was sitting on his perch looking very confident.  He slept briefly sitting up, the way the adults do.  Then he sat with one eye open, then closed it and opened the other eye, basically being a bit comical.  His sister found another unusual perch sitting behind one of the lower turrets, and disappeared for a while into an alcove, hiding away from everyone.  Obviously she’d had enough of being in the limelight after having Springwatch filming yesterday!

Meanwhile, the other two girls still haven’t left the turret.  They were, however, both sitting on top of the box flapping their wings for a while.  That’s the first time we haven’t had a juvenile on the nest or turret floor.  They’re getting closer.  Both were looking slightly anxious, obviously still plucking up the courage to go.

Towards the end of the afternoon the male rejoined his other two sisters in the nest where they all cuddled up for a snooze. 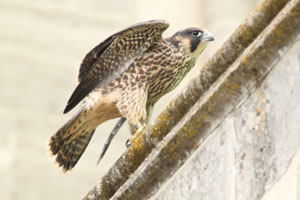