What a first flight!

Our boy, number 35, finally took the plunge and flew this afternoon.  Daniel, our youngest volunteer, was lucky enough to be watching him through the telescope as he took off.  I was on my way back to the cathedral after a lunchbreak, and saw him land high on the top tracing of the spire, where dad normally sits.  I assumed it was dad that I was watching, until I went in and was told otherwise.  It didn’t occur to me that one of our youngsters would fly all the way up and land on a tricky perch like that on their first flight.  How brave!  He’d flown around the spire a couple of times and took a few attempts before successfully landing.  He sat there for well over an hour, turning around occasionally, and almost falling off – he was funny, trying to get a grip on the small perch.  When he took off again, he flew very well, flapping his wings a lot more than the adults do, but he did us proud.  He then tried to land on a few more difficult spots and gave up, going back onto the top tracing.

In the evening we got a wonderful picture of him sitting with one of his sisters, number 37, on top of the turret.  The sun came out for this special moment!  She’s the same one who was with him in the earlier post, “Coming on in leaps and bounds”.  The other two girls have yet to leave the turret.  They’re looking quite anxious and keen to get going though, so fingers crossed for this weekend!

Gordon Buchanan and his team from Springwatch were here today, enjoying finding out about our famous peregrine family.  The film they took is due to be shown on Monday’s show. 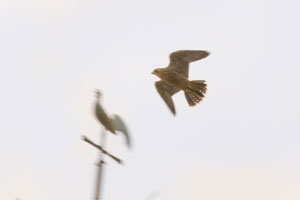 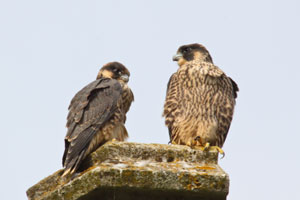