We had a lot of people visiting today.  It seemed that the peregrines knew and decided to cooperate.  The last few days have been very quiet, with both adults spending a lot of time out flying, or sitting on the North side of the cathedral out of the sun.  Today, they sat for most of the afternoon on top of the nest turret and pinnacles on the South where we could see them through telescopes.  They fed the chicks at lunchtime, and again just as we were packing up late afternoon.

All four chicks are getting quite boisterous now, running around inside the turret and flapping their wings, building up strength.  Dad fed them the lunch, and the three girls are now bigger than him!  Their honey-brown juvenile feathers are very clearly visible now, through the wispy white downy feathers.

Mid-afternoon, both adults suddenly zoomed off in an easterly direction, so I thought “OK, either they’ve seen an irresistible flock of pigeons, or there’s another bird of prey…”  Shortly afterwards, it was confirmed that they’d seen a buzzard and both flew to chase it away before it got too close to the nest.  It soon left.  Can’t say I blame it – I wouldn’t stick around for long if I had both adult peregrines attacking me! 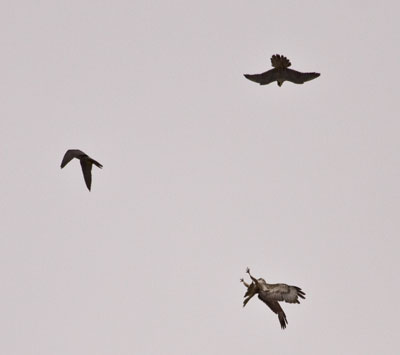 This entry was posted in general. Bookmark the permalink.