Where do I start? So much happened…

What looked to be a fairly unpromising, quiet day, turned out to be very exciting and action-packed!We arrived early afternoon to find dad sitting on his high spire perch, with no sign of mum.  Nothing happened for about an hour – then a female interloper arrived.  She obviously had her eye on the nest site, and seemed quite persistent, so dad had to work quite hard to chase her off with lots of squawking.  Mum appeared from wherever she’d been hiding, and sat guarding the nest turret while dad saw to the intruder.  He returned full of energy, perched briefly, the two of them chattered for a while, then, with a little encouragement from her, he flew down and they mated.  Must’ve been the adrenalin rush from the chase!It wasn’t long though before the female intruder returned – mum and dad were both very upset, flustered and squawking – again, he chased her away – this time giving us a tremendous display, diving very fast as if to attack the unwelcome guest, barely missing her – this continued for a couple of minutes, as he drove her further east, away from the cathedral.  He returned full of vigour, so pumped full of adrenalin he flew incredibly fast in an elaborate display around the cathedral, showing off and burning off his excess energy.  He eventually landed in the NE turret for a well-earned rest, presumably exhausted!  We all started breathing again, having been holding it during the excitement.Moments later, a buzzard appeared.  This didn’t concern our pair at all, he just flew lazily high overhead before drifting away.  This was followed shortly afterwards by a red kite, again a slow leisurely flight over the cathedral and away to the west.  A fantastic sight!Minutes later, we couldn’t believe it when we saw the female interloper back again – she really was very determined!  She came very close, flying right over the nest turret, and around the spire.  She stayed for a while, with our pair watching from their perches, squawking but not chasing.  We were stunned that neither of them did anything – after a couple of minutes, the intruder left of her own accord.  We wondered if she may be one of our pair’s daughters from a few years ago, but can’t be sure.Both birds were very fidgety for a while, understandably!  They delighted us by mating again!  Twice within an hour, both times caught on camera – incredible!Mum hopped into the nest after that, and chattered – dad got the message eventually and went to get her some food – he took it into the turret for her, and they stayed there together, enjoying a peaceful meal.We decided there probably wouldn’t be any more excitement, so packed up the tripods etc.  Just as we were saying goodbye, two buzzards appeared – we watched while they flew and frolicked for a minute or two just to the north of the cathedral.  They appeared to be a courting pair out enjoying the sunday afternoon together.  What a lovely way to end the exciting afternoon at the peregrines home! 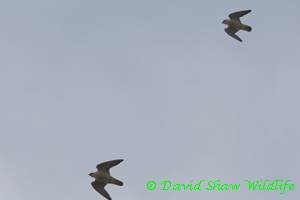 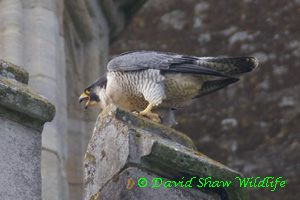 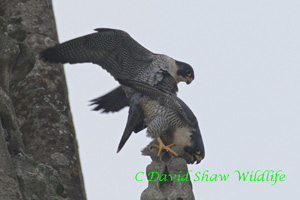 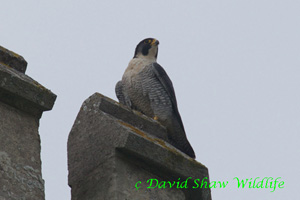 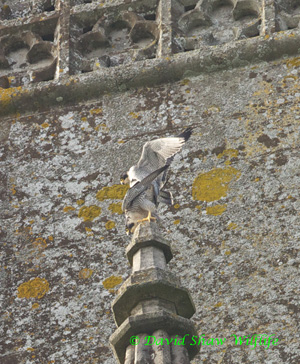