Spring is in the Air…

There are definite signs of courtship behaviour, and starting to prepare for another brood in the spring.On arriving at the cathedral today, there was nobody to be seen.  A while later, both birds flew in together, him landing on his high perch and her on a pinnacle below.  Mum looked a bit twitchy and aggravated when a sparrowhawk appeared flying over to the east, but didn’t move.  Not until dad flew off, at which point she followed, staying close to him.  They returned together again, him to sit on a pinnacle, while she sat on the nest turret looking in with interest.She moved to a pinnacle just above the turret to preen, then dad flew down to the nest turret, earning him some brownie points!  He’s obviously making an effort to impress her, and it didn’t go unnoticed – she was watching him very closely.We ended our afternoon with a superb view of him sitting directly above her to the east of the spire. 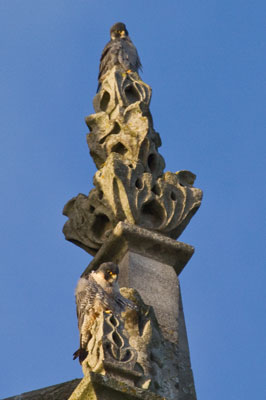