A sparrowhawk circled around the cathedral for a while, but the peregrines didn’t seem worried about it.  They seem to ignore it as long as it goes away again.  They did, however, have another more determined visitor.  This was another peregrine – a female.  She, like the sparrowhawk, circled around while dad sat watching, and mum was in the nest turrett.  After a while, dad got fed up of it and flew out to chase it away.  He was gone for a good 20 minutes or so while he escorted the female interloper far from the nest site.  Due to the lack of noise or distress, it’s very likely to have been one of their juveniles from a previous year – it seemed as though he recognised her.  Presumably she was wanting to claim her inheritance of the family home.  Clearly, her parents aren’t ready to give it up yet!

Something else we saw a little later was very surprising.  Mum emerged from the turrett and sat on pinnacle.  Shortly afterwards, dad joined her – mating again!  This struck us onlookers as very odd behaviour.  They’ve already got three eggs, and presumably a fourth on the way.  This wasn’t for breeding purposes, so would only have been for relationship-strengthening or courting, not something we expected at all.  Apparently this was the third time within the last few days too! 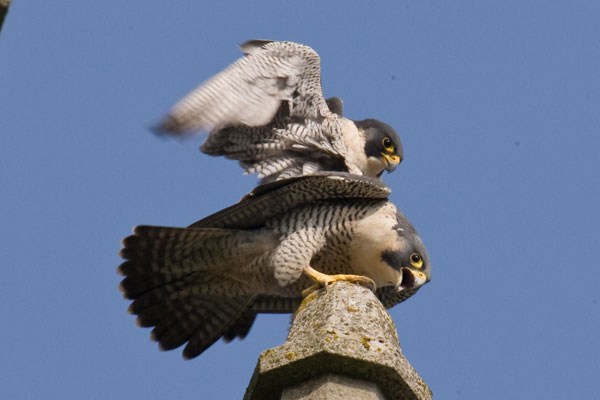